The festive season cash-flow crisis is becoming persistent. About six years ago, non-economic and economic actors deemed Sierra Leone’s economy to be one of the fastest-growing economies within the African sub-Saharan region. However, this has plummeted in the past 4 years with the problematic hinge on Covid-19 although the pandemic is not entirely the bedrock of the very economic challenge the nation faces. The new persistent problem is cash flow and access to cash. Exactly two years ago, a similar situation in accessing cash was witnessed and the government blamed it on Covid-19 for the delay in distributing the denominated new printed Leones. That does not seem to be the case, especially at peak times when people use more cash during the festive periods as the ugly situation recurs. The question is-why must we rely on cash in this modern era of banking? The lean towards digital banking in third-world countries is paying dividends in countries link India, Eastern Africa, etc. Before we delve further, it is worth assessing the state of our economy.

The State of The Economy

In 2018, the nation’s gross domestic product (GDP) was $4.082 billion. As of 2021, the gross national income stands at 14.28 billion Purchasing Power Parity in dollars. Furthermore, the World Bank depicts that in 2021 the nation’s GDP growth rate was hovering around 3.1-3.7 in annual change. Quite frankly, no progressive and sustained sharp increase has been seen over the years. The underlying statement is sustained growth over time.

Visibly and economically, the nation has a marked traditional economy in which most of the population engages in subsistence agriculture and over-reliance on mineral exploitation. Direct government involvement in economic activity exhibit limiting private sector development. Those direct government involvement include policies, bureaucratic bottlenecks telling on the ease of doing business and in the processes of registering start-up private investment based on prescriptive directives to maximise tax collection for government and not seeking business development, sustenance, and growth, which will invariably tell on employment and long term contribution to the tax system. The current business atmosphere is-set-up your business and pay your tax even if the business have limited or no income. Business Health is given least priority in the approach; “we do not care how your business thrives” as long as taxes are paid. The aspect of tax rebate is never considered even when portions of the constitution make mention of that under the tax laws. The government’s tax eye has always been on the extractive industries and the lucrative sectors for concessions and continuity and leaves the health of smaller industries to fade.

Successive governments and the notion of the nation’s population as a whole, have always believed that diamonds, gold, and other precious minerals are sufficient generators of foreign currency earnings and the major factor to lure investment. Conversely, the pandemic and key changes of late in the world’s economy is a teacher on how reliance on few sources of revenue could limit a nation’s thriving ability. There is quite frankly an impetus to diversify our economy, and encourage investors without prescriptive and dogma approaches to investors or potential investors within the spectrum of aiding sustenance for those set-up businesses. An innovative approach to attracting investors is the next big idea worth exploring.

A retrospective look at the impediments to economic growth mentioned above leads to the current realities of lesser trade freedom (63.6) indices over the years. Trade commentators and key economic performance monitors indicate there are a limited foreign investment and an underdeveloped financial sector. Reports indicate Sierra Leone’s Fiscal health is set at 54%. Business and Financial Freedoms are at 34.4% and 20% respectively in the sphere of reduced government integrity rated at 32.4%. There is therefore a case for our financial actors to put heads together faster with innovative approaches that breathe transparency, quest to lure investors, and protection for investment through dealings with those enablers or huddles that will frustrate new and established businesses.

Over the years,  economic priorities are questionable. Not putting the cart before the horse should be the morals for any growing economy one would think. More importantly, not rushing at the revenue basket all too speedily to spend at will is also a note of caution when normalcy breaths life into the economy after innovations and a huge investment climate begins to filter in. Remember, there is an economic slag that says “for any boom there is a burst to follow”. The question is how low can you go before you gain economic normalcy again? Those are the trends to watch in an economy.

The festive cash flow is a disaster that directs our thought processes on how hasty decisions and proper planning can affect economic progression. One key example of not putting the cart before the horse is the government’s introduction of the newly denominated currency and not dealing with the economic rudiments of combating inflation (currently at 15.7%), core inflation rates through prudent economic operational policies, and increasing exports, foreign reserves, and currency circulation. Could it be that the capacity to handle this isn’t favourable all these years before the sudden global economic crisis?

Inflation depreciates the currency and therefore decreases the money-buying power of an economy. “Inflation affects all aspects of the economy, from consumer spending, business investment, and employment rates to government programs, tax policies, and interest rates” (PIMCO 2022). Sierra Leone’s inflation is in the double figures now and therefore explains our core economic variables, Consumer Price Index (CPI) and Expenditure Price Index (PCE) are at a tipping point to tell more precisely the long term effect of inflation on the economy within the context of core inflation. This in itself is a major drift for investors on getting value for investment.

As it stands, the government wage bill has increased meaning government spending directly tells on the proportion of money used from our GDP, which is currently calculated by the 2022 Index of Economic Freedom to be 22.4% and with an overall tax burden of 14.4% for the past three years. The nation’s budget deficit relates to an average of 4.7 percent leaving public debt equivalent to 79.1 percent of our GDP.

The expectation for an improved exchange rate and currency value on the new Leones denomination met core inflation and the inherent fiscal lethargy in the nation’s economy. The lack of widespread and efficient digital payment system and minute digitisation in the banking and financial sectors of the country compounds the problem further in the phase of “ease of doing business”, currency circulation, and significantly increased timing in processing business transactions. These huddles only breed business frustration that is enough to chase off potential investors, tourists, and associates. This means digitisation is one of the single most important means to up investment potential in this modern world.

Digitisation is the conversion of data into a digital format with the adoption of technology. Embracing digitalisation is very important for the banking sector. Through the adoption of digitalisation, banks can provide enhanced customer services that will invariably provide convenience to customers and help in saving time. Digitalisation reduces human error and thus builds customer loyalty. With digital banking, managing large amounts of cash have also become easier. Digitalisation has also benefited customers by facilitating cashless transactions. Customers need not store cash anymore and can make transactions at any place and time. Today, people have round-the-clock access to banks in many countries around the world due to online banking made possible with the use of the internet and Sierra Leone as a nation can tap into that sustainably.

Sierra Leone can leverage this opportunity by increasing further access to broadband internet through directives on quality of service to Mobile Network Operators (MNOs) and last mile land fiber reach typologies and not just concentrate on economy drive leaving those things that will in itself propel basal economy for longevity in tax contribution.

The fibre infrastructure is being set up but at a very slow pace. While MNOs are already using the fibre infrastructure, their sales and tariff are questionable with regards their purchase price from SALCAB and that sold to customers. Trade monitors ought to intervene. To date, three cities can boast of the presence of the fibre network-Freetown, Bo and Kenema but their city-wide distribution is fragmented.

If cash flow or currency circulation issues are to be addressed, we need mindful authorities taking action to ensure digital payment system becomes a must for key businesses with turnover hitting ten million Leones old note. This way, most transactions can be done in-store leaving hard cash at banks for very remote areas where access to the internet is hard and digital payment systems for certain businesses are not necessary.

Surprising to see in the 21st century that people cue to receive remittances across the world and accessing their hard-earned cash from banks becomes a challenge with uncertainty on how they will pass the festive season comfortably. The only way out imagined of this is a digitised banking system which will transcend to a digitised payment system for seamless interactions from customers to business accounts. Once this is pushed through well in the coming year, it would require encouragement from the business sector to adopt the digital payment system that is intended to reduce the burden of low circulation of physical cash within the country. This way financial accountability, transparency, and the fight against corruption will be taken a step further. The inverse or snail pace action to this will mean further frustration for businesses, remittances, reduced transparency and financial prudence.

There is a need for financial service providers and the government to adopt an open and embracing approach to private companies like Fintechs. Banking laws must be accommodating and not just dependent on licensing, regulation, and supervision. Card payment facilities can be improved upon. The majority of ATM machines are based in Freetown mostly. The provinces observe very scanty ATM machine facilities. Services by MNos can be upgraded to provide reliable data services with NATCOM and the Ministry of Communication rapidly aiding the process for banking and financial service providers.

Covid-19 had its toll on economies but it has it positives in that it created the need for the digital working space and remote working. We can use that now to increase the use of digital solutions through mobile money, mobile apps, debit and credit cards, and digital banking solutions to solve Sierra Leone’s cash crisis and progress its economic development for faster transactions, which will positively impact our GDP.

For more on news and events please visit http://fopradio.org/radio 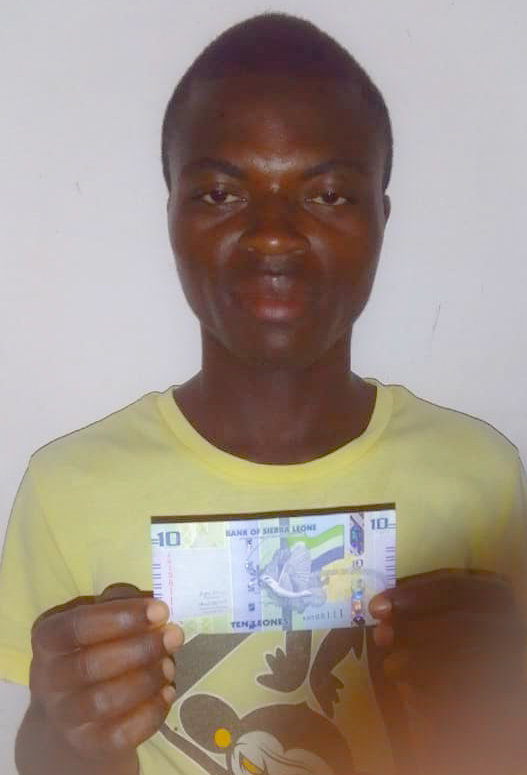